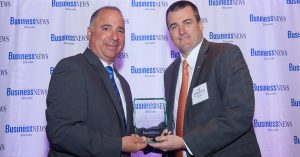 William McGuire, Founder is honored at Long Island Business News event June 6, 2017—Woodbury, New York—The Global Foundation For First Responders (GFFFR) and its Founder William McGuire, were honored today with the prestigious award: Non-Profit of the Year, by Long Island Business News. The foundation was singled out for its work with first responders and their families with much needed services ranging from scholarship awards and on-going support programs. The Global Foundation for First Responders raises awareness for the needs of national law enforcement, firefighters’ children’s foundations and other children’s charities so their immediate, and long-term needs, are satisfied. “I am honored to accept this award on behalf of our charity and all the dedicated work of those that contribute to the foundation and to the brave men and women we work with,” states William McGuire, President and CEO of Global Elite Group and Founder of GFFFR.

Since 2015, GFFFR has established a mission to support the families of first responders who lost
their lives saving others in the line of duty. William McGuire’s passion is to give back to those who serve without hesitation to make our world a safer place. He has been steadily raising awareness and funding to ensure the foundation’s mission succeeds in reaching the needy of the fallen.

William McGuire is a native of Long Island and a former Fireman from Mineola. He started the foundation nearly two years ago after witnessing the ever-increasing needs of families of first responders first hand. It became his passion to give back to all that serve leading to the development of Global Foundation for First Responders. McGuire is also the President and CEO of Global Elite Group, an international security company headquartered in Garden City, serving the needs of the aviation safety industry, event management  and property security for companies worldwide.